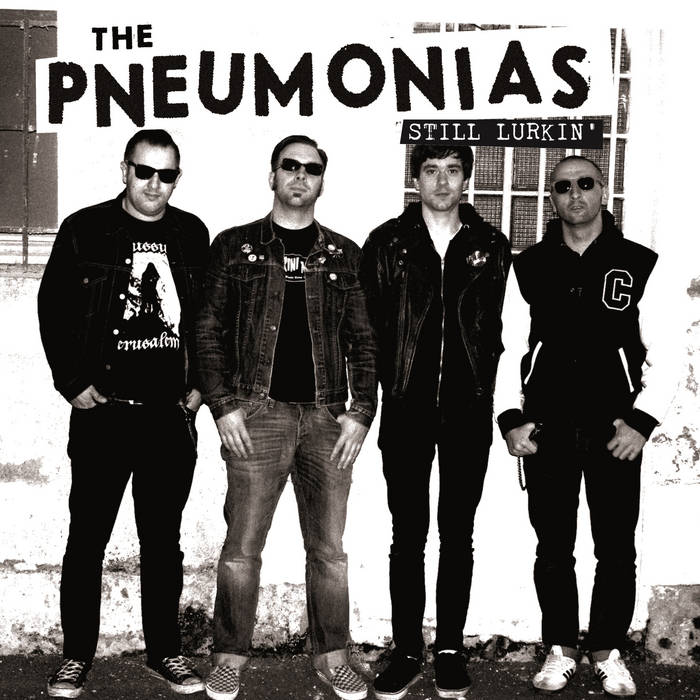 The Pneumonias were on the first two records out on Frantic City Records, now they are celebrating their 10 years of lurkin' around with this new 10 track 10" and it turns out to be Frantic City's 30th release, co-released with Juvenile Delinquent Records who put their "Cheap Trash Session" tape out last year! Their first gig was opening for The Egos (from Melbourne, featuring Mad Macka from The Onyas... no coincidence! For those who care he is now playing with the mighty Cosmic Psychos) in La Rochelle in May 2004 and since then they've been pulling out some real trashy and messy Garage Punk shit like the Rip Offs going through an Angry Samoans' set-list. Their first 7"es came out on Dutch label High Shool Refuse/Reject Records in 2004 and 2005, then there was the split 7" with the Four Slicks and the "Automatic Pistol" 7" on Frantic City, and finally the "Cheap Trash Rock & Roll" CD on Zodiac Records in 2007, which contained 12 tracks taken from their first recording session with Lo'Spider in Toulouse. They then recruited a second guitar player for more virtuosity, as Tony Pneumonia used to be called "Kptain Swindler" and was the brain-master of the Swindlers, the only French band who ever put a record out on Rip Off Records (does anyone actually remember THE best Punk Rock label ever?), and then Power-Surf trio the Bikini Men. But Tony never got a chance to record with the Pneumonias until January 11, 2014, when the Pneumonias went back to Lo'Spider's recording shack and layed-down 10 tracks in one afternoon. They actually entered the studio with only 9 tracks but made one up on the spot! Virtuosity, I told you. The guys had so much good music hidden in their bellies that one band was not enough and over the course of the last 10 years, all members of the Pneumonia family started or played in different bands such as the Mean Things, Wild Zeros, Bonzers, Creteens, Protokids and many, many more!